An Immersive Multisensory Experience of the Deep Sea

The Aqua Children acknowledge that we create and study on the unceded ancestral lands of the Coast Salish people and pay our respects to elders past, present, and future. ABYSSAL was created and showcased on the original and sacred land belonging to the Willow (Sammamish) People who, since time immemorial, cared for it in all its forms.

Reconciling the historical and ongoing violence and genocide of Indigenous peoples, Earth, and Water is all of our responsibilities. We look upon land and water acknowledgements as the first steps towards action that is grounded in reciprocity. Conservation cannot happen without learning from and giving voice to the Peoples whose land we visit and live upon. Within conservation, we must center their ancient wisdom and traditions. We revere the sanctity of the Sea and those that call it home for their existence nurtures ours. We are all accountable for protecting and caring for our waters and habitats. Mending our relationships to Native communities is critical to solving the climate crisis that affects us all.
‍
˚○◦˚.˚◦○˚

Aqua Children (est. 2021) is comprised of artists and designers who have passions for creating physical experiences that focus on transforming perceptions of time and space through interactive media. Working across multiple disciplines and voices allows us to dive into the intersections of installation art and empathetic design practices.

ABYSSAL is a multisensory art installation focused on immersing one in the deep ocean environment. With an aim to foster curiosity and empathy for ocean ecosystems, we initiate a personal encounter with the habitat of deep zone flora and fauna. The installation uses video projections, sculptures, and sound to form a layered experience, enveloping guests in a new world. Aqua Children uses the word “abyssal” to convey the deep ocean’s mystery and hidden life, as well as its ability as an art installation to generate connections through exposure to deep zone habitat. As an art installation, we hope to provide people an opportunity to generate connections with non-charismatic marine flora and fauna.

ABYSSAL’s primary structure consists of a large PVC tank displaying animated video projections of the illustrated deep sea. Within the darkness of the room,  particles of bioluminescence and stylized plankton drift within the tank’s boundaries. The inside of the tank is filled with recycled paper sculptures resembling kelp, hanging from the ceiling in multiple clusters to create a dense forest environment. RGB LED lights are contained within clusters of the kelp sculptures, and react to motion as one enters the tank. The interactive glitter and glow of the lights reflect the agency that plankton display within their habitat through their natural bioluminescence.Accompanied with this visual and tactile experience are layers of ambient instrumentals and oceanic sounds that can be heard from the in and outside of the tank sculpture.

From the start, Aqua Children aimed to represent non-charismatic creatures using light as a primary medium. The team’s initial concept, Luminescence of the Reef, was comprised of five coral-like climbing structures placed in an immersive space using video projectors to simulate a deep-ocean habitat. The ocean was a foundational part of the team’s qualitative ethnographic research through aquatic institutions and art exhibitions. Additionally, empathetic practices used by aquariums and zoos were explored, primarily the practice of providing experiences, which involves simulating a habitat and a creature’s natural behaviors to give individuals the means to interact with unfamiliar organisms.

The ocean was a foundational part of the team’s qualitative ethnographic research through aquatic institutions and art exhibitions. Additionally, empathetic practices used by aquariums and zoos were explored, primarily the practice of providing experiences, which involves simulating a habitat and a creature’s natural behaviors to give individuals the means to interact with unfamiliar organisms. 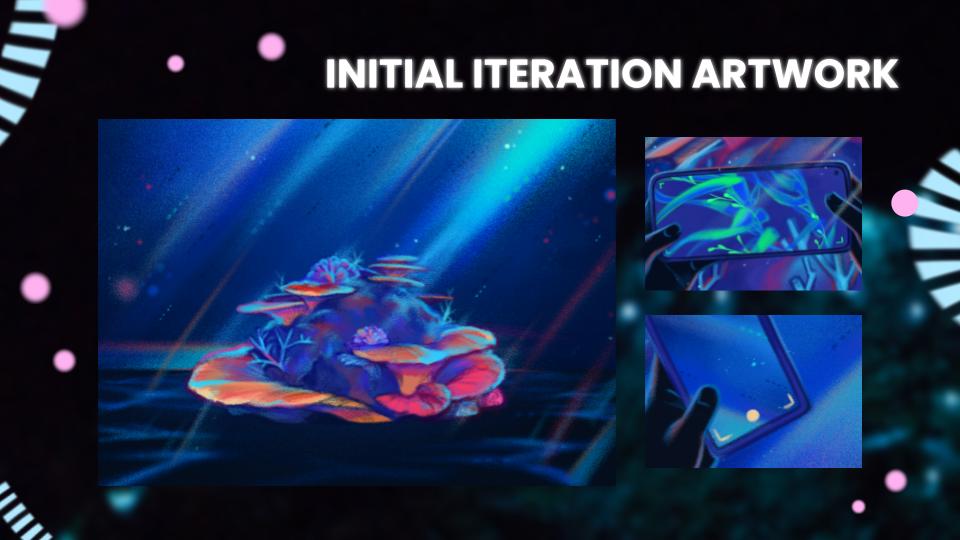 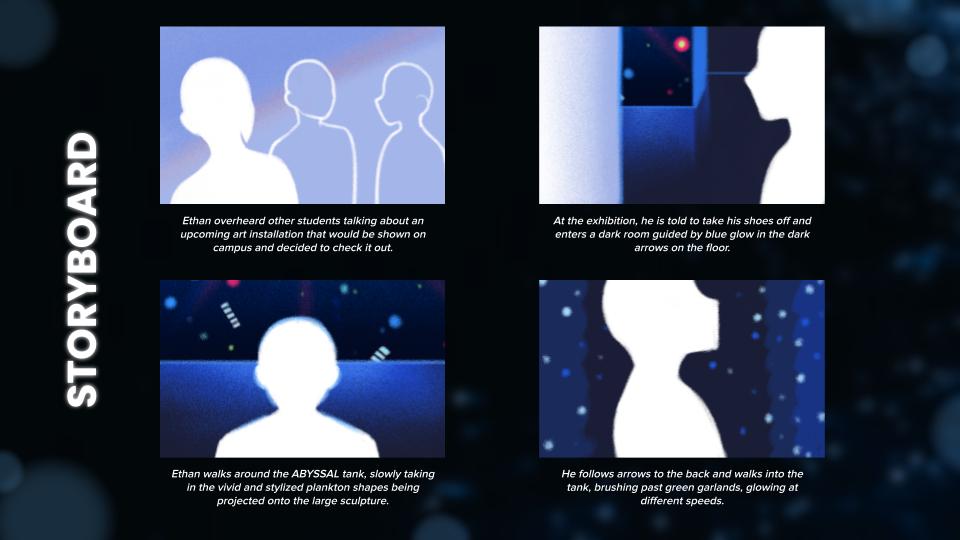 Our installation, Luminescence of the Reef is a scalable project consisting of five different “islands” of rock-like coral sculptures within a room, leaving open space between each area to walk around and encourage the flow of people in a circular motion. There would be video projections on each wall playing videos from the sea that would envelop the guests in the undersea atmosphere.

As we defined the project’s scope, a tank structure became the primary form with the outside becoming the surface of a projector animation. Inspired by an interview with retired oceanographer Melissa Ferguson, ABYSSAL uses bioluminescent plankton as its primary subject due to its status as a non-charismatic creature labeled as both flora and fauna. Ferguson noted its snow-like appearance illuminating the deep waters; this imagery was kept in mind for stylizing all components of the installation. 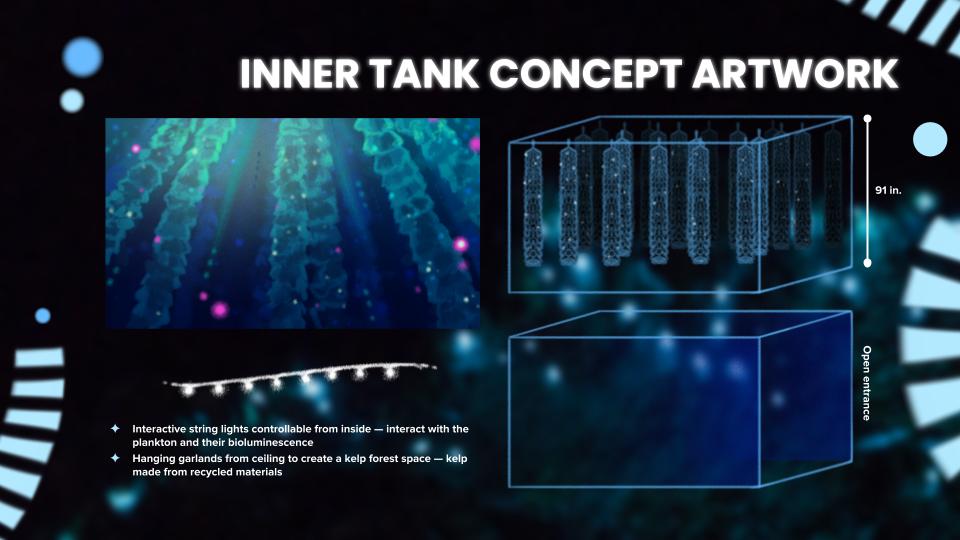 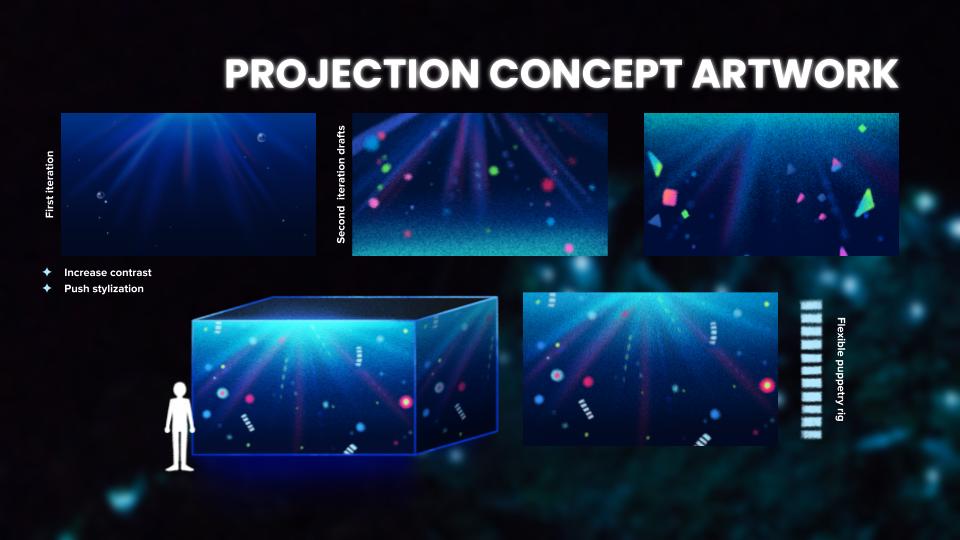 With consideration for the environment, Aqua Children prominently featured recycled paper. The initial kelp sculpture form was made of origami fish modeled after senbazuru, or paper cranes. The final shape of the garlands was more voluminous and varied in texture, mimicking organic shapes of marine flora. The projected animations underwent many changes, starting with a muted palette with little marine life. In order to display the deep ocean’s biodiversity, layers of silhouettes were slowly added while the vibrant luminance of stylized plankton became the center subject. 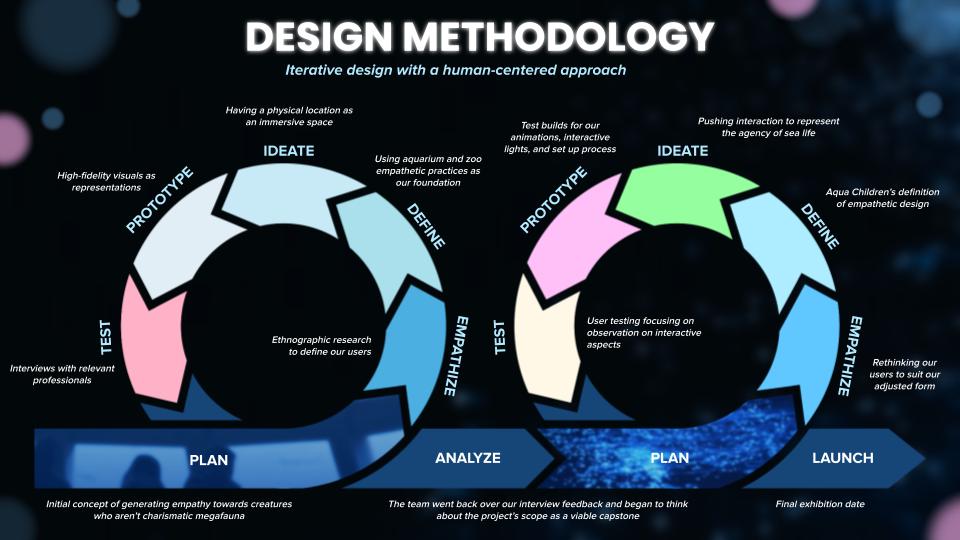 ABYSSAL’s first public showing took place on May 21 & 22, 2022 at the University of Washington, Bothell. The experience of transforming perceptions of space worked to initiate conversation between the team and the steady stream of guests, adding additional voices to the full list of contributors that made ABYSSAL possible. Valuable feedback was gathered and the team plans on continuing to iterate and develop it, taking it further into the deep. 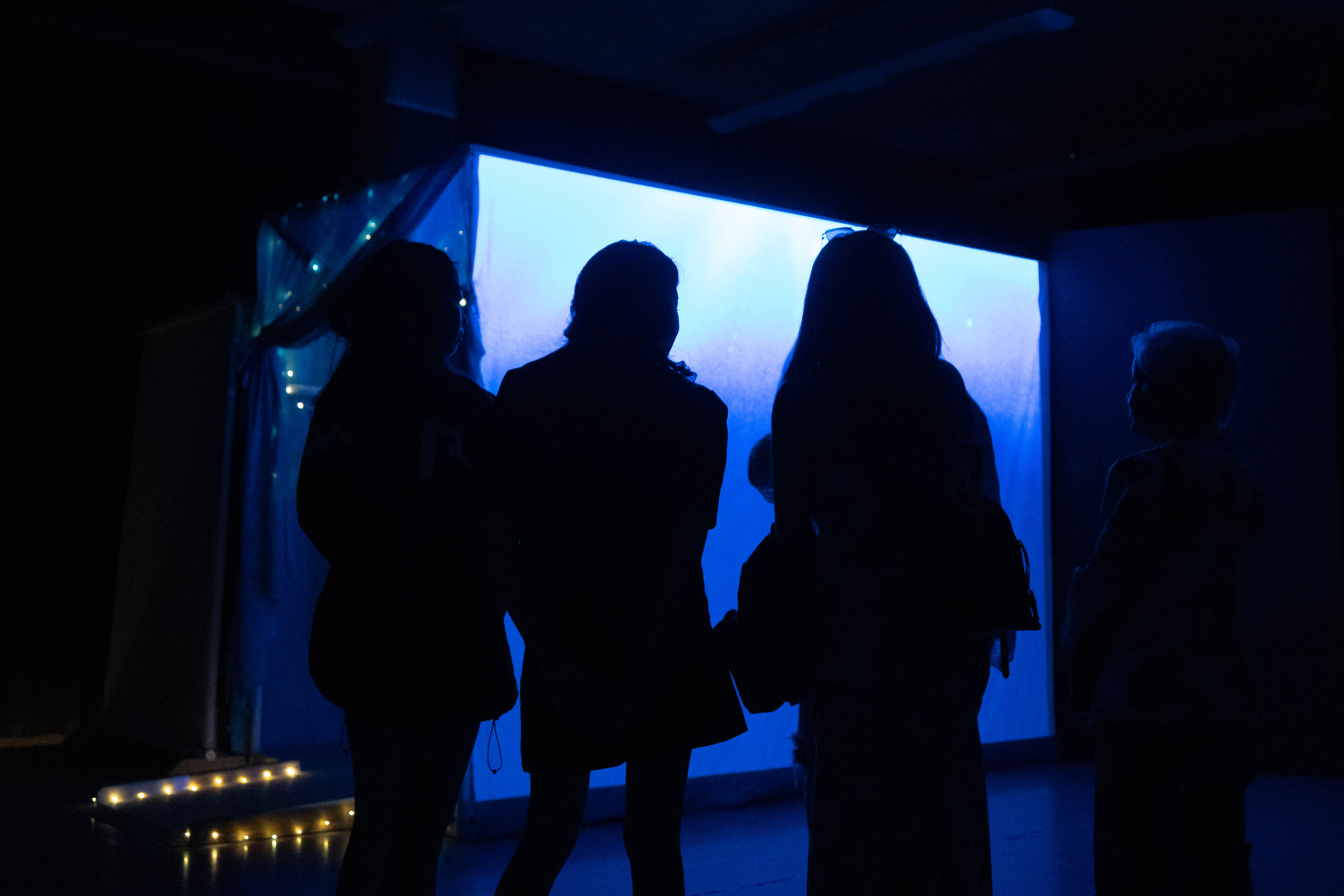 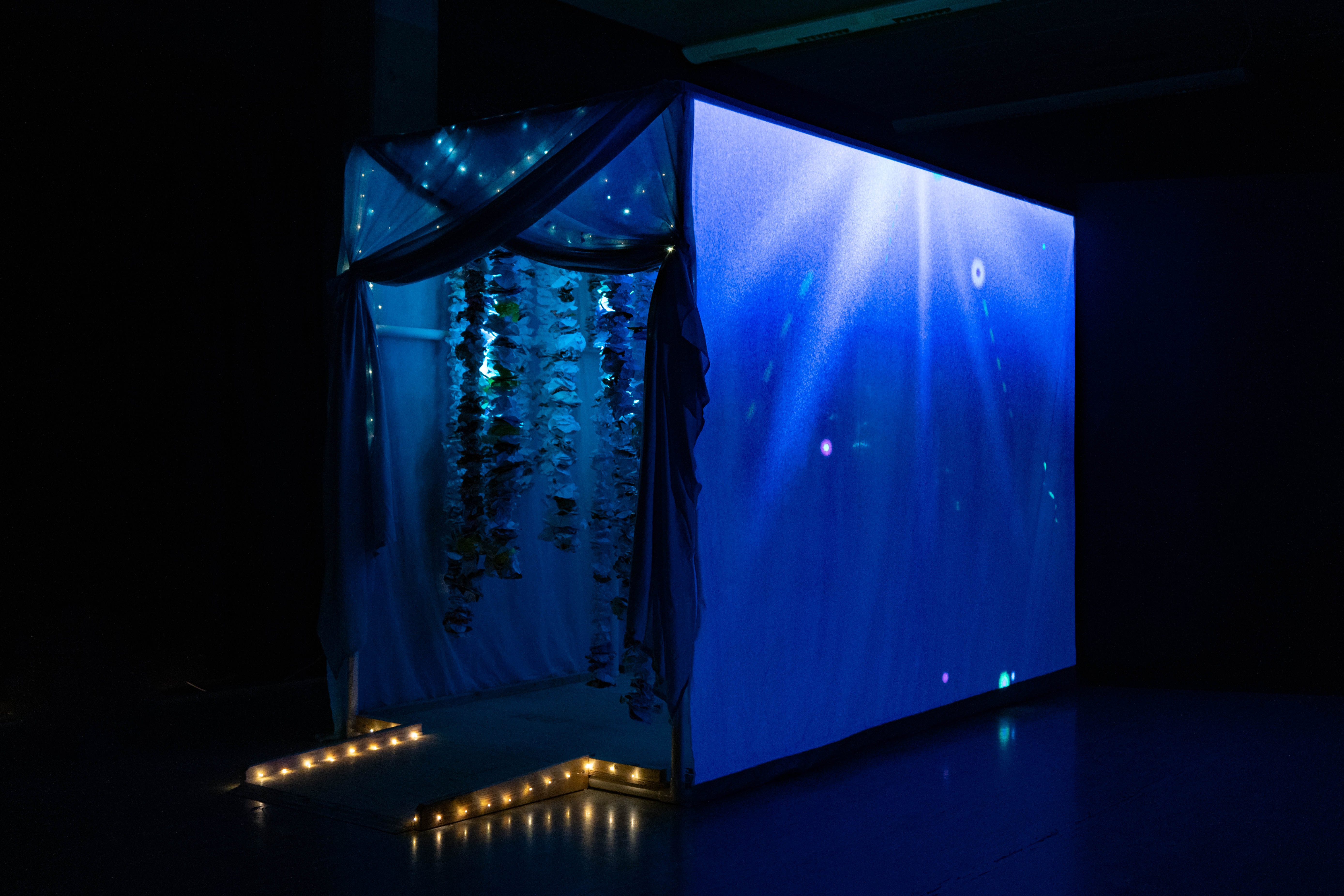 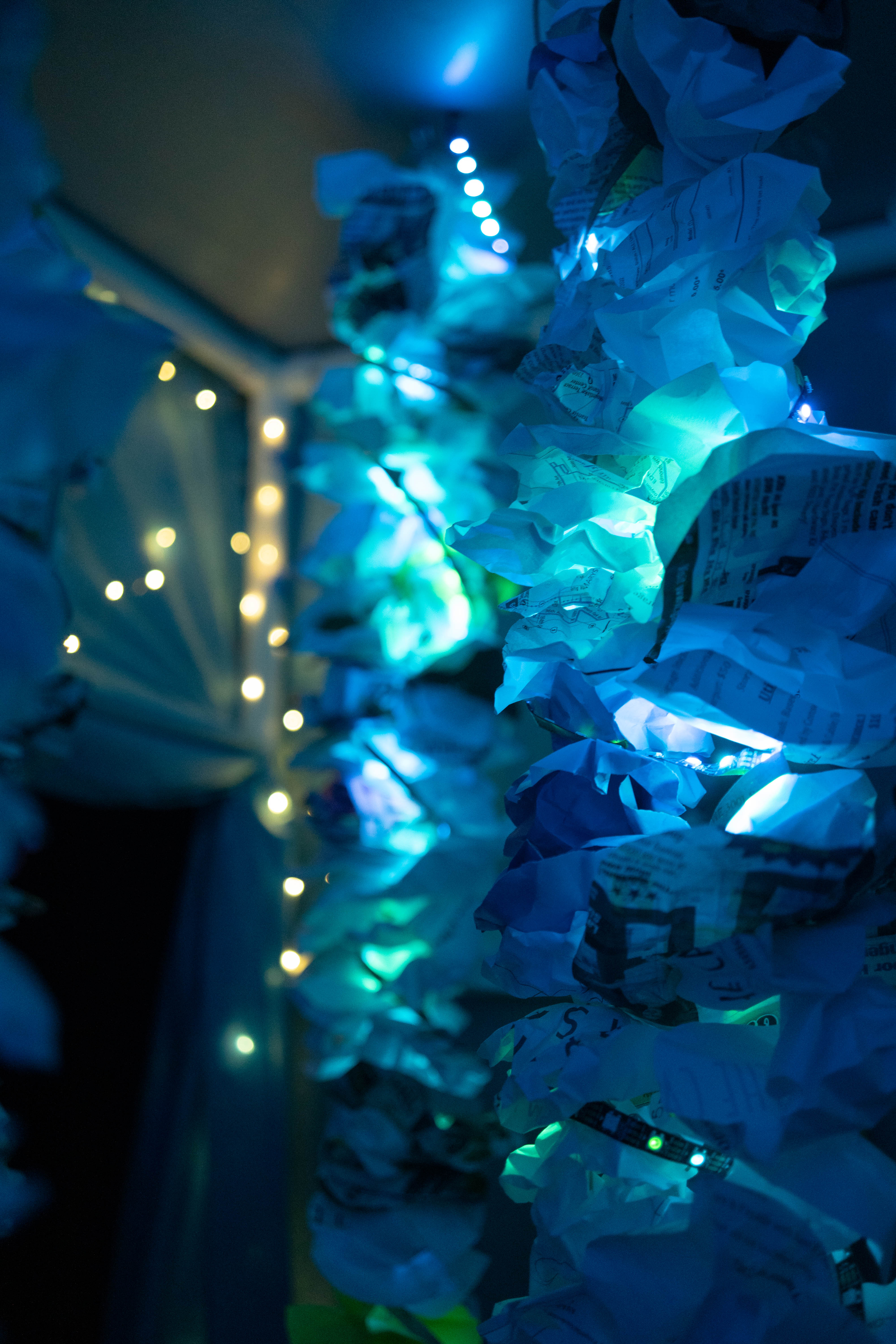 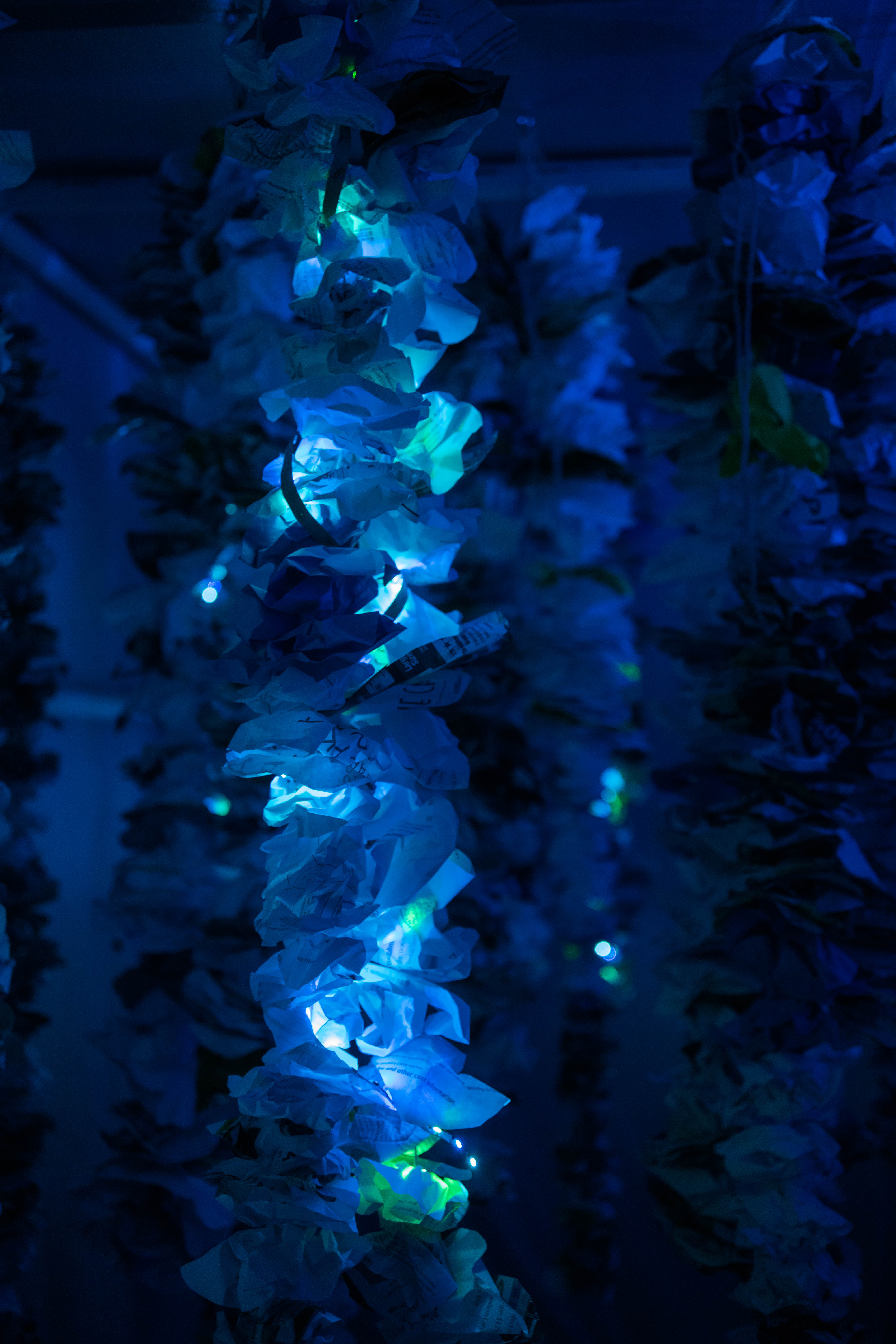